Mariannah Amster and Frank Ragano are the power couple behind the internationally-renowned annual CURRENTS New Media Festival, produced by their nonprofit organization, Parallel Studios. We caught up with them to discuss CURRENTS, emerging media and Santa Fe. CURRENTS New Media 2018 runs from June 8-24 at El Museo Cultural de Santa Fe. Check out their website for more information. 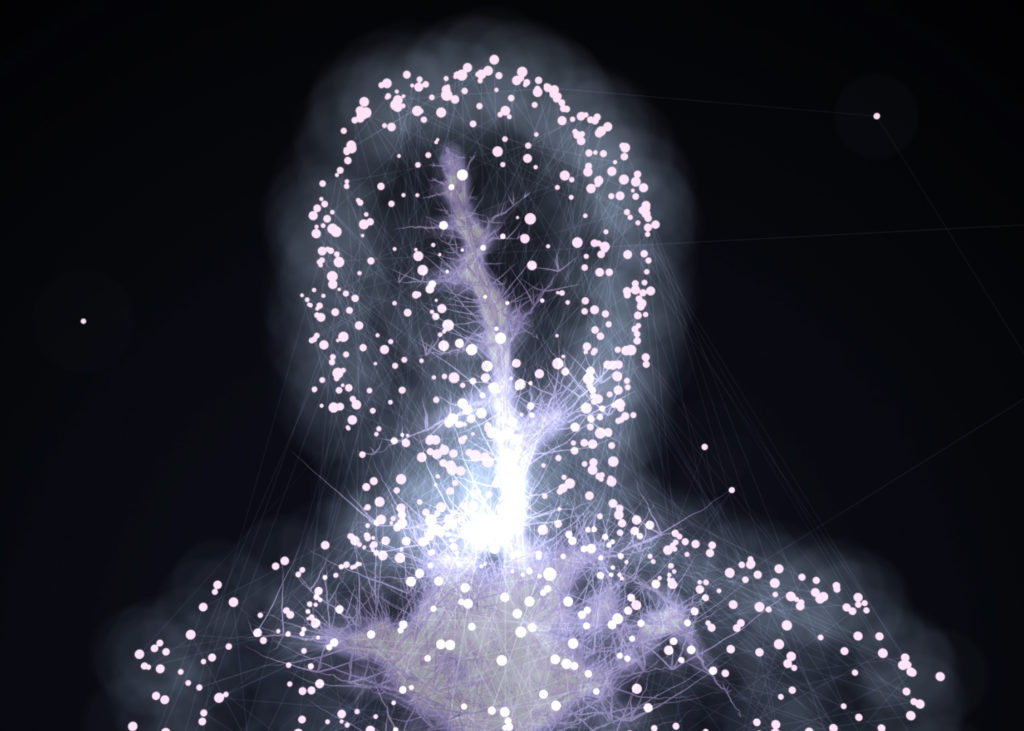 Can you talk about the history and evolution of CURRENTS? How did you get into in this work?

Mariannah Amster: We got into it originally because we were artists and had a lot of friends who were doing great work. We started doing pop-up shows in 2002.

Frank Ragano: The first one was at CCA in the warehouse.

MA: I was originally a painter, and Frank was many things—a sculptor and installation artist. And then we started doing video. It’s evolved into many, many things.

FR: So we started with a 2002 show, and then we did pop-ups for several years at galleries like Zane Bennett, Claudia Marr and ART Santa Fe. In 2010, we thought, “it’s been a success so far, so let’s go bigger and start doing this international festival.” The first one in 2010 featured mostly local and regional artists. After that, it expanded into more international work. This will be the 9th year. 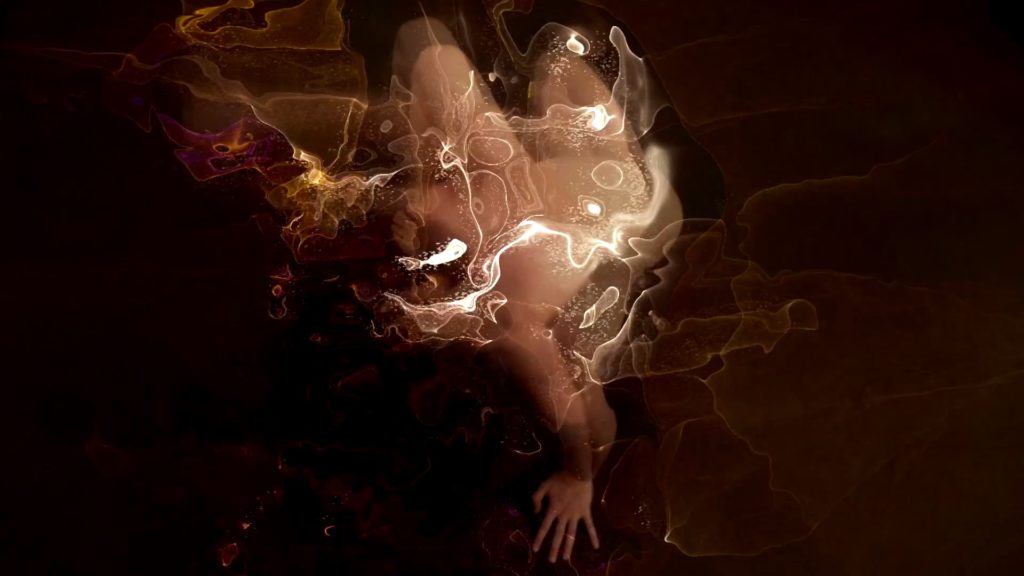 Is there anything you’re particularly excited about for this festival this year?

FR: We’re excited about it all.

MA: The first thing that came to my mind is that we have an incredible number of excellent interns this year. As far as pieces, it’s really hard, because we have such a range of work.

FR: We have one piece that’s a very beautiful vase on a pedestal, except one side of it is all smashed, but as you approach it, it only allows you to see its good side. It always keeps the bad side hidden from you, so it’s a humorous piece.

MA: I’m always reticent to describe pieces too much, because I like people to come in and discover them. But we could talk a little bit more about the different types of work. I think there are some captivating audio pieces that create a living environment out of sound that’s constantly changing.

MA: ​We have another ambisonic sound piece that allows you to experience immigration both physically and aurally in a directional kind of way. It promises to be a very interesting experience for people.

FR: There are several VR pieces, some augmented reality pieces, and beautiful robotics pieces too. And there’s always Stanley. 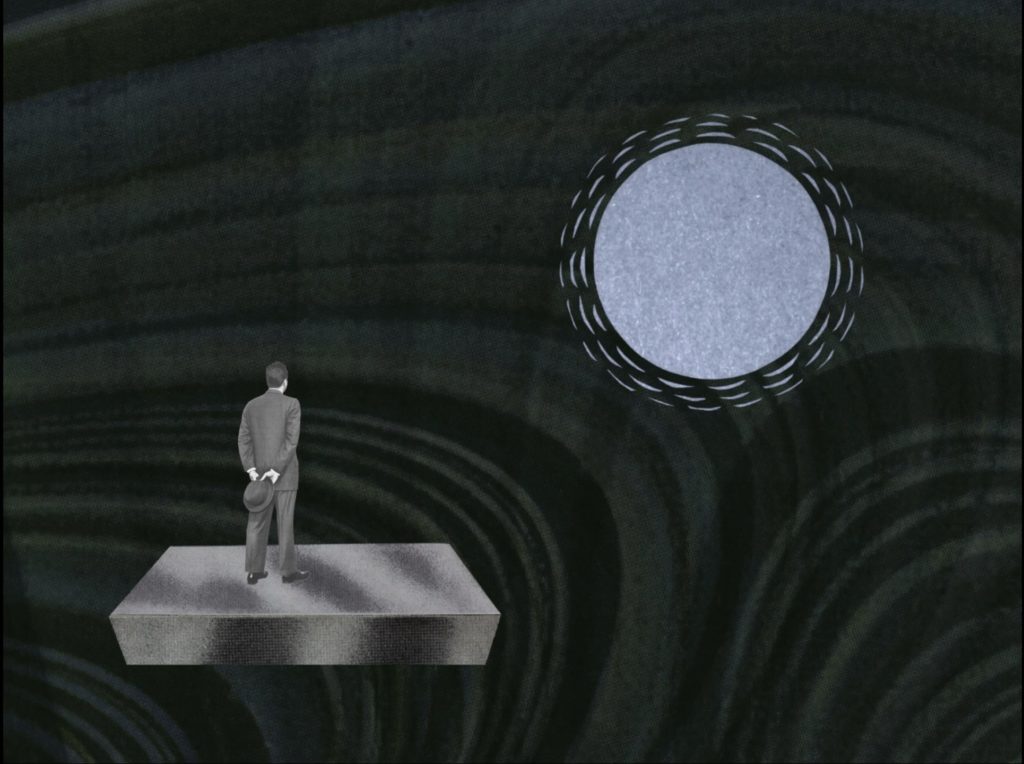 We interviewed Caitlin McShea, and she talked about how exciting it is to collaborate with you all on the InterPlanetary Festival. Is there anything new or exciting about the events and collaborations happening this year?

FR: ​We have a piece by Eddie Edwards that crosses between science and art called Galaxy Ecosystem. This one was actually funded by the NRAO, the National Radio Astronomy Observatory at the VLA. They’re supplying the equipment to show it. She’s a painter. She’s taking their data about the galaxy, and she’s created paintings that will be animated based on information from them. She’s working with an animator who works with the NRAO. So that’s a crossover.

MA: There’s the Max Cooper concert that people should know about that’s meant to be the closing of the InterPlanetary Festival and the opening of CURRENTS. He’s a computational biologist and he’s also a DJ and VJ.

FR: We have another piece that crosses science and art. The artist is Scott Kildall from San Francisco. He’s gone around taking readings of different water sources all over different areas of New Mexico, different rivers, and then he has wires in these bottles of water. Because of the level of heavy metals and contaminants, it creates different sounds. So somehow the sounds will be correlated to the contaminants in the water. You’ll be able to actually play this like a little instrument, creating different sounds based on the contaminant level of the water. So that’s kind of a science/art crossover. It’s kind of like citizen science.

We have an opening night performance which is a VR piece called Movements. The artists are Natalie Sun, Elliot Cole and Michael Catalano. Elliot’s a composer. Natalie’s a producer, and Michael works for Pixar. He’s an animator. Elliot will be in a VR headset on stage, and in the VR environment he’s got an orchestra playing live, and some kind of hotspot in the environment that he’s using to trigger sound and image. So you’ll hear what he’s playing and you’ll see the images that have been generated by the sound. Then a few people from the audience will have a chance after the performance to actually go up and try it out themselves. That’ll be fun.

MA: That will happen several times Friday and Saturday nights.

FR: There’s lots of great work in the show.

MA: We really want people to come in and discover it themselves. 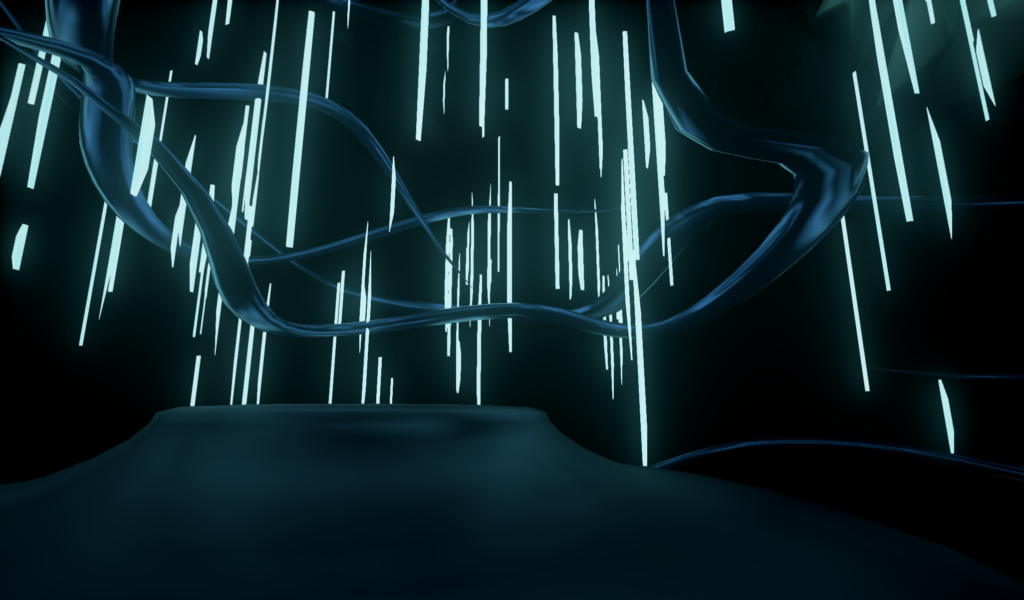 What excites you about emerging media?

MA: I didn’t know I was going to be in this area of artistic endeavor, but I needed it to execute an idea. What I love about it is that it broadens the palette that artists have to express their ideas and their aesthetic. It’s just an extension of artmaking and another tool, and it has remarkable capacity.

FR: The whole direction of a lot of interactive art is giving the audience the ability to participate and to interact with the work in a way where they have an effect on the work, and the work becomes something that’s generated live. It has a framework, but through the participation of the audience, it keeps evolving. So there is that kind of experiential, participatory nature of a lot of the work.

MA: We love the fact that some really great work is often interactive, but we also are looking for work that’s just really strong aesthetically or conceptually. 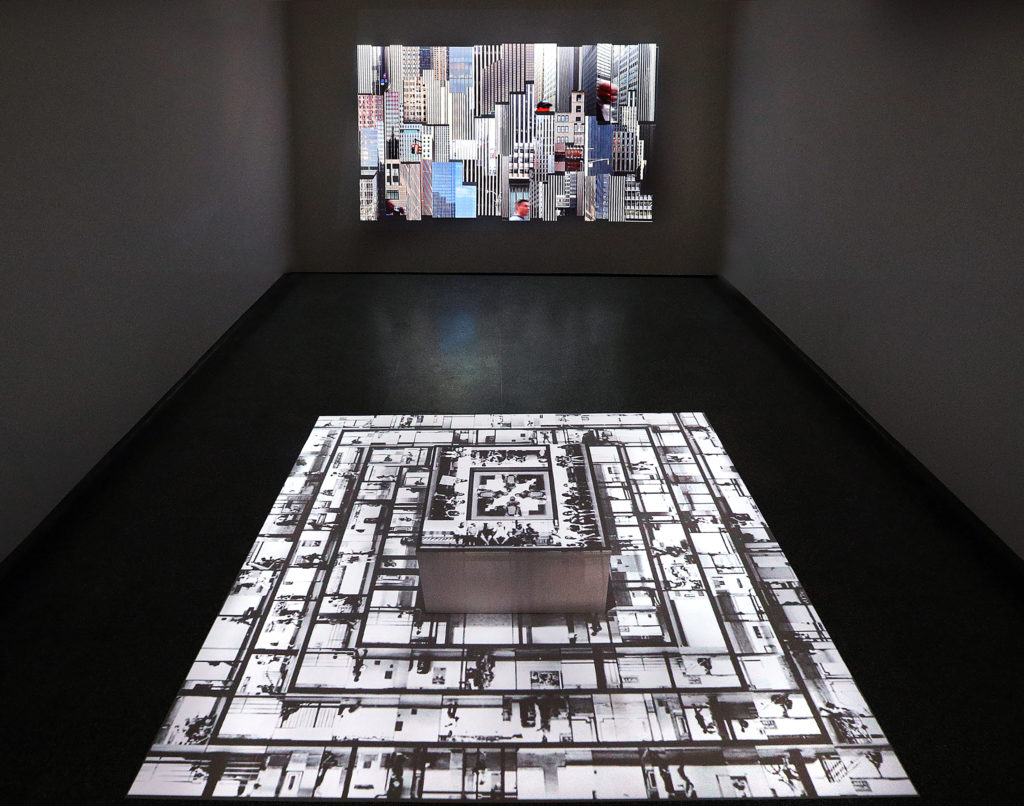 How has the emerging media scene in Santa Fe changed over the years from your perspective?

MA: I think like everywhere this has become more integrated into what people think of as both art and entertainment. But it’s also pretty unique that Santa Fe has such a vibrant new media arts sector, because you can go to a larger town and nothing like CURRENTS or Meow Wolf or InterPlanetary is happening in much bigger cities. There’s some, but really not that much in the United States.

FR: One of the artists here said there’s only one venue for this kind of work in Seattle, and it’s very tiny and the work is rather meager. It’s nothing like Santa Fe, and that’s Seattle. So that’s pretty remarkable for this little town.

MA: I think the other thing is Santa Fe has art as its foundation. The acceptance of media as an art form is unique. A lot of sensible people in the US are more a tech-oriented, and we really focus on the way artists use tech to make work. So it’s a different focus, and I think Santa Fe really supports that because of its nature. 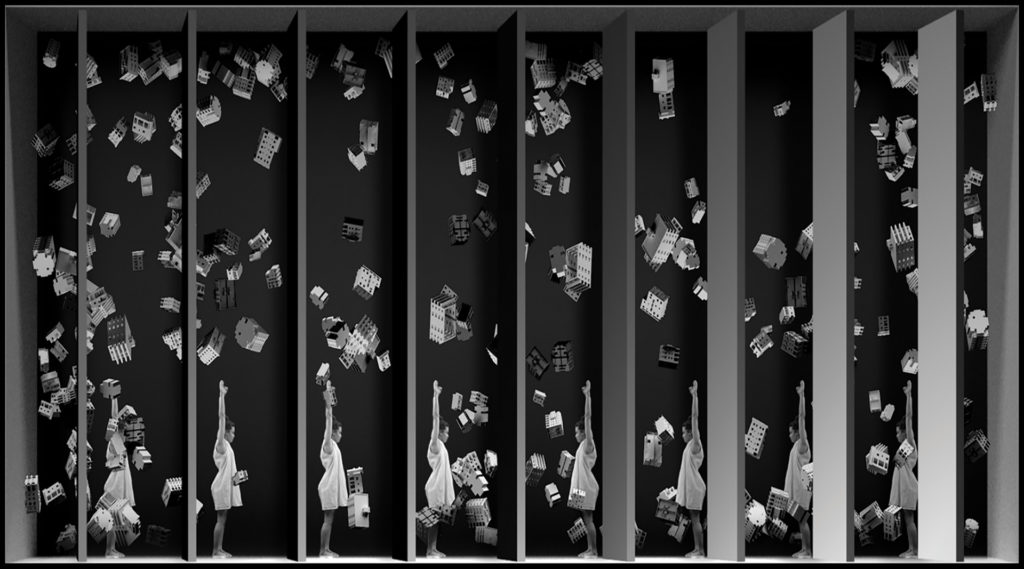 What do you think is special about Santa Fe in this moment?

FR: The goal of the Emerging Media Alliance as I understand it is to put Santa Fe on the map as one of the centers for emerging media in the country, if not in the world. This is a pivotal moment, and how people recognize Santa Fe—how people think about Santa Fe—is going to be seen in a whole new light. It’s additive to a degree. Historic traditions here are important. We’ve got the whole thing. We’ve got ancient history and culture, and we have the latest cutting-edge technology. It’s a pivotal moment where Santa Fe will start to be recognized as that kind of center.

MA: That kind of center with really good coffee. 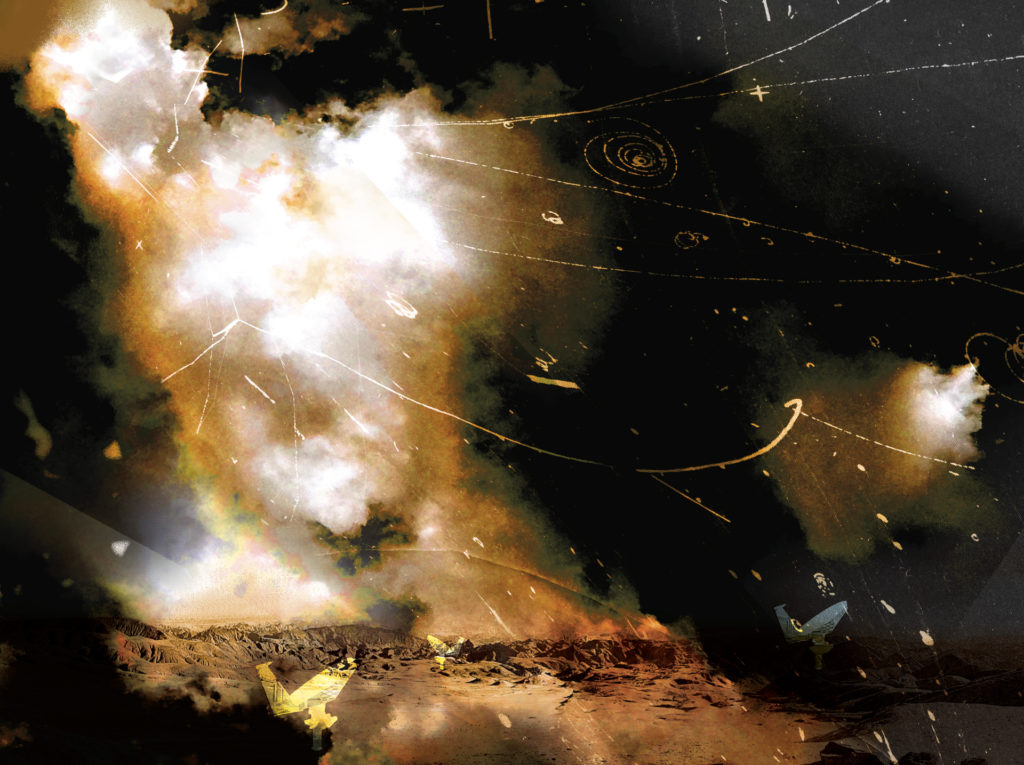