Two stilt walkers clad head-to-toe in white — their painted faces staring ahead with resolve — march past me to the chaotic din of festival-goers and audiovisual art installations. They weave their way down Taos’ Civic Plaza Drive, lined with adobe buildings whose terracotta-colored walls are masked by video projections. Between every step comes a short pause, and it’s then that I notice the eclectic crowd trailing behind: children lit up by LED accessories, elderly women giggling as they mimic the performers’ pace, a gaggle of tourists watching with smartphones held high. 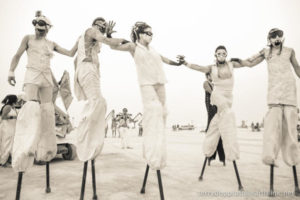 After watching this procession pass, I think to myself: we’re not in Taos anymore. Pardon the cliche, but Dorothy’s shocking realization in The Wizard of Oz becomes an apt comparison to PASEO’s transformation of historic downtown Taos. (But don’t count on wanting to go home anytime soon.)

The transcendental feeling of being teleported to an unfamiliar world fits well with the festival’s 2018 theme: SPACE. This theme creates a bridge between the universal and personal by moving between the “outer” space of the universe to our “inner” space as humans. PASEO artists explore the theme by creating immersive, participatory installations that facilitate introspection and encourage movement. “Participants’ senses will be activated, curiosities stimulated, and minds transported to a wondrous universe in flux,” explains the PASEO website. “As powerful scientific instruments and new media tools expand our senses, allowing us to see into the farthest corners of the universe and the invisible spaces within our bodies and minds, we begin to grasp the enormous power and potential of humanity.”

The streets and parks of Taos become a new world—one that immerses visitors in an environment ripe with potential for discovery. 30 jury-selected technology-based installations become a vehicle for this exploration. 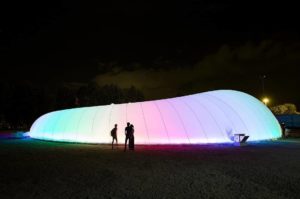 One installation that evokes the idea of the universal “outer” space is the festival’s largest draw (and largest artwork in general): Space Cloud. Located in Kit Carson Park, this massive installation, by Madrid-based group Espacio La Nube (Hugo Cifre, Álvaro Gomis García, and Miguel Ángel Maure Blesa), is an 8,000 square foot inflatable structure which can hold over 500 occupants at a time. Its white fabric walls respond to the inhabitants moving throughout the tent; from inside, the creators of Space Cloud control and improvise its custom lighting, allowing rainbows of color or flashes of light to follow inhabitants as they walk through.

The expansive area inside Space Cloud becomes home to seven additional installations, ranging from multimedia performances, virtual reality environments, audiovisual projections, and more. Interium by David Stout of Noisefield and Cory Metcalf is a virtual reality experience which focuses on the possibility of what it would be like to explore an extraterrestrial world. After adjusting your VR headset, you enter a universe where our laws of motion and physics do not apply: 3D shapes whiz past you in all directions, colors expand and contract, and even the ground you appear to be walking on is as fluid as the forms surrounding you. 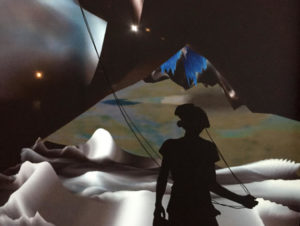 Another highlight inside Space Cloud is VISIOPHONE’s Cosmic System, where visitors can interact with software that allows them to dictate the sound and visuals projected onto the walls. You are encouraged to move in front of a technological device which records, manipulates, and reinterprets a participant’s movements into groups of interconnected, swarming particles, becoming a virtual, geometric ballet. Every hour, dancers with Ballet Taos perform in front of Cosmic System, creating a thought-provoking collaborative dance, transcending time and technology. 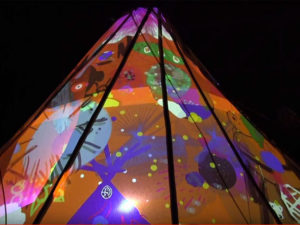 Several more installations dot the road and buildings between Kit Carson Park and the Taos Plaza. Moving through this outdoor arts festival means moving through not just the conception of space, but physical space itself. The multiple installations collaborate to become a sprawling exhibition with no apparent beginning or end, which is how you feel starting at either end of Civic Plaza Drive. Between you and the next information booth lay a collection of four site-responsive experiments including a participatory performance, a live film shoot, a live-streamed performance, and an audience-generated sound experience in an exhibition titled We Are All Space in Time by curator Erin Elder. These four installations, focusing on the complexities of coexistence, create a discussion with the nearby Cross-Pollination Portraits, an interactive projection which is coded to meld individual features of passersby into a collaborative portrait, created by UNM-Taos Art Team.

A particularly timely and thematic installation is GLOWpod — (G)rowing (L)ife on (O)ther (W)orlds by the UNM-based Social Media Workgroup (Paul Ross, David Di Donato, Brandon Wade, Jared Rendon-Tropak, and Ariel Manese, directed by Andrea Polli). This installation, comprising of an orb-like, LED-lit structure filled with local flora, invites the viewer inside to explore. The artist group explains that GLOWpod acts as “a territory somewhere between a greenhouse of tomorrow and [an otherworldly] nursery,” thus raising the existential, extraterrestrial question of what would would happen if human life could only be sustained by moving to another planet. The installation reacts to those who enter the space by sensing their body heat and carbon dioxide output (along with the surrounding environment’s temperature, humidity, and light levels) and visually reinterpreting these shifts into an animated light show. 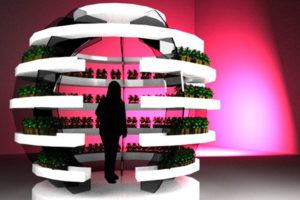 At the end of Civic Plaza Drive in Parr Field, Gleamscape, by the Colorado-based collaborative AudioPixel, is an alternate, interactive landscape of LEDs whose colors and patterns are dictated by audience participation. Musical instruments—technologically tethered to the installation—can be played; the sounds are then reinterpreted into a massive display of light, rippling with wonder and dynamism.

Now in its fifth year, The PASEO Festival continues to explore universal themes and expand connections between the past, present, and future. Though not immediately obvious, it is only fitting that Taos is home to this arts festival; together, the historic downtown area and the multisensory new media installations become a site-specific space for discovery, inspiring visions of infinite possibilities through the experience of exploring the innermost parts of ourselves and the outermost facets of the universe. 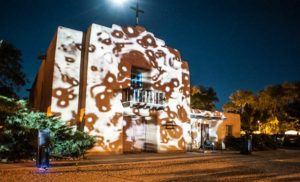 A video installation from The PASEO Festival 2016. Photo courtesy of Taos.org.

The PASEO Festival is located across historic downtown Taos and will be open on September 14 & 15, 2018, from 7:00-11:00pm. Visit EMA’s September event guide to see all associated events and visit The PASEO Project website for further details.