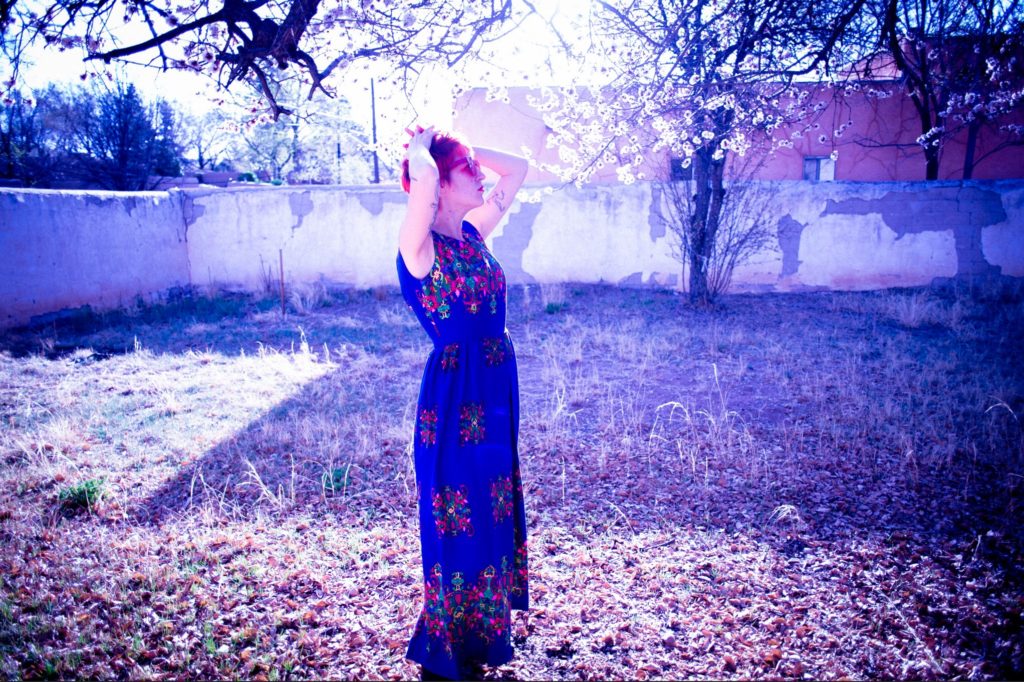 Paris Mancini is an interdisciplinary artist based in Santa Fe, New Mexico. She works with a variety of emerging media to create unforgettable, immersive experiences. She recently released her 9th studio album, Alive. Check out her work.

This is part of an ongoing series of interviews we’re conducting with emerging media trailblazers. Stay tuned for more on our blog. 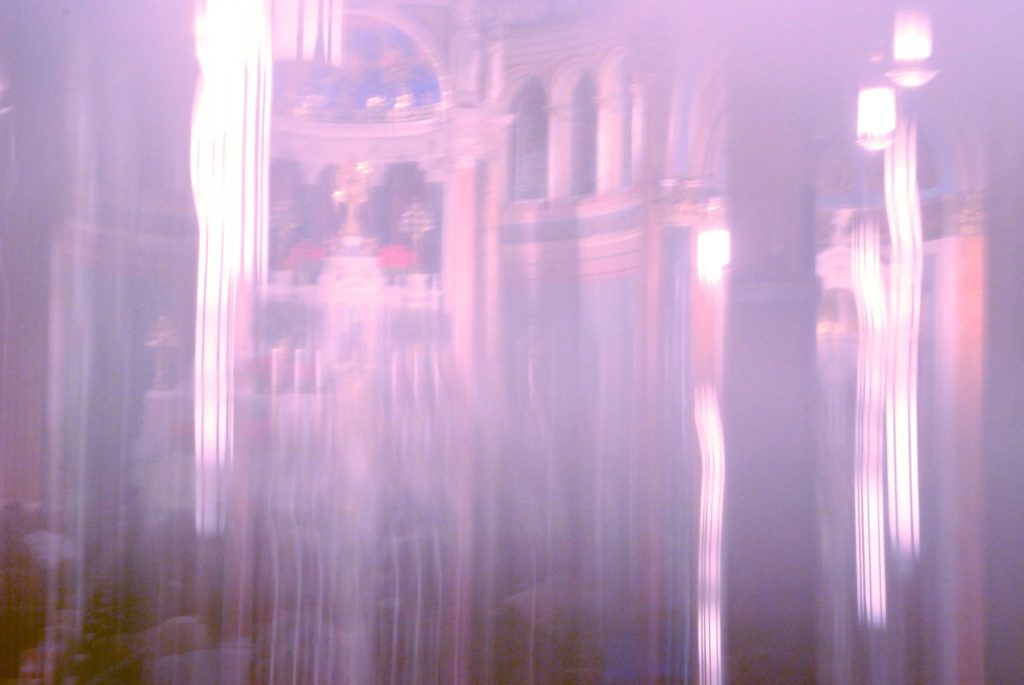 Who are you and what do you do?

​I am Paris Mancini, and I am a Jill of all trades. I do some video work, some film work, and then mostly music, installation and performance art. That’s my shtick. 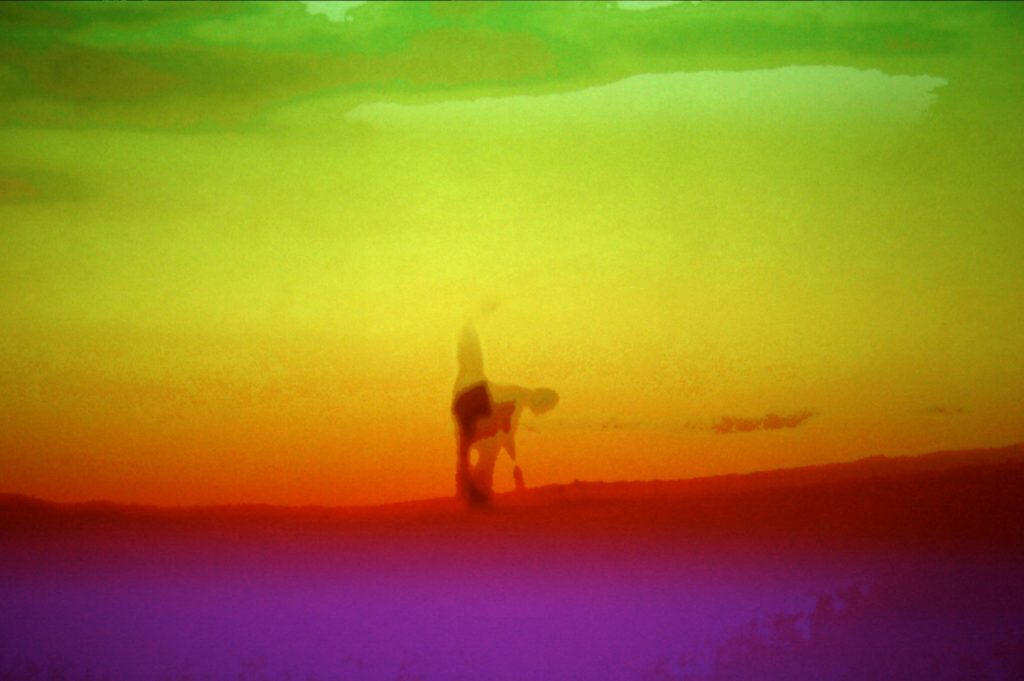 How would you describe the work that you do?

I take a David Byrne approach to it, or a Laurie Anderson approach to it— I crisscross and cross-pollinate across media with a lot of different subjects, and it’s project by project. Recently, I directed a play that was an immersive media play. I never officially directed a play ever before, but I treated it like another project. Like I’m going to work, and I’m going to use some tools in my tool box, and put this thing together and transform thinking. That is something I feel like I know how to do.

I think each project is different. My biggest project, Psirens, changes album by album. Some albums are orchestrated and have a lot of classical instruments on it, other albums are more like hip-hop, [with] very heavy beats and synthesizers, or with friends collaborating on them. It’s hard to define, because each thing I do is very specific to the project.

What drew you into the emerging media works that you do?

I was always really interested in it, even as a little kid. I enjoy putting together all the elements of a sensory, immersive experience— not only controlling the sound of a show that you’re going to go see (like a music performance), but also control[ing] the light, and [making] the light mimic the sound. It can control the space, the shape of the space. Then, the audience is walking into a world that they can see and hear and feel, and that’s always been exciting to me. 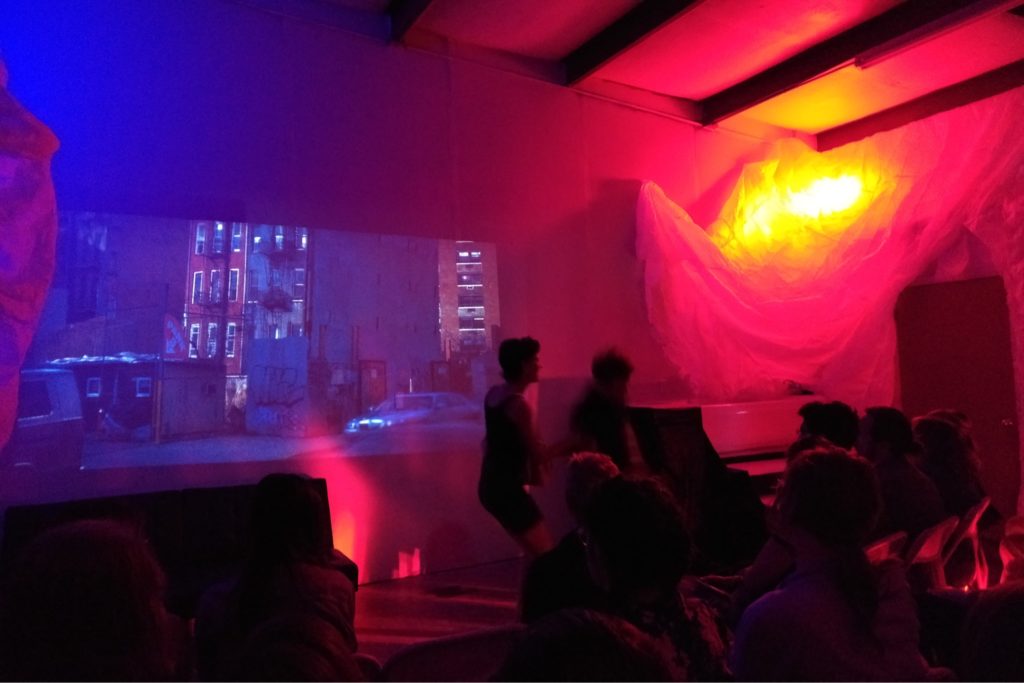 I find a lot of freedom in digital art like photo and video, because it doesn’t take up space. I was in and out of New York for 8 years. Space is something you’re faced with every second of the day there. When I moved to New York, I could no longer paint, there is nowhere to put the canvas afterwards— even if it was really small— there’s no storage. Finding a way to make art where there is hundreds of thousands of gigabytes of space and you can print it physically or you project it, and then it disappears when you take the show down— I love that, the leaving no trace and picking up and going somewhere else with the installation. 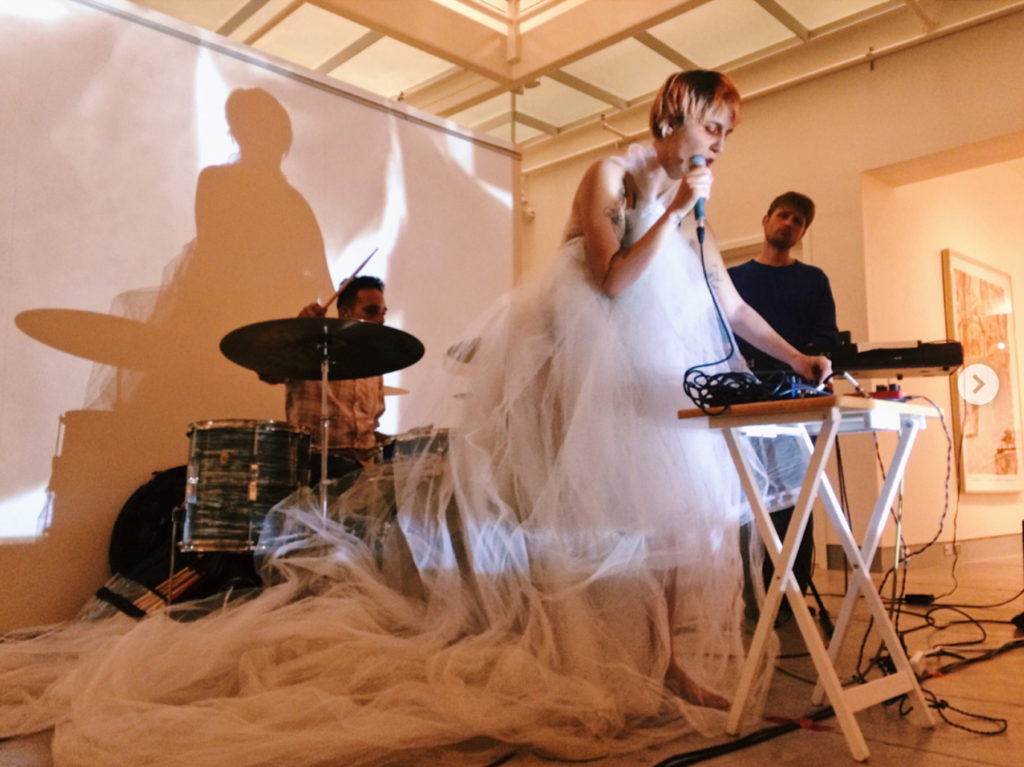 You’ve traveled all around the country and the world, right?

Yeah. I have an itch that I have to scratch.

You have been in Santa Fe for a while now, haven’t you?

It has turned into a few years. I was on the road. I decided to make a never-ending tour solo in my car playing Psirens songs, touring and traveling non-stop. I told myself that I would honor a place where I found community that I vibed with and felt supported and elated by. And of all places, it was Santa Fe. I was surprised, because I lived here before. I spent summers here as a kid, so I have a long history of Santa Fe. When I came back in 2015, I instantly felt like I was part of something that felt really good.

What do you think is so special about Santa Fe in this moment right now?

I think the landscape has changed in Santa Fe in interesting ways across the board. One of the big ways is that we’re getting people from major cities around the US who are now moving here, and they are makers. They’re video people and media people, and they’re at the forefront of this new art technology movement.

Here, the community’s so tight that we talk to each other a lot. So when things change here, it’s a huge ripple effect. And I think in this case, it’s a positive one. It’s really exciting. We have a lot of young filmmakers in town right now, young art-makers who fell in love with Santa Fe, and see opportunities in some of these new companies, like Meow Wolf. There’s exciting stuff happening, and there’s not an impossible amount of people trying to also get those opportunities. 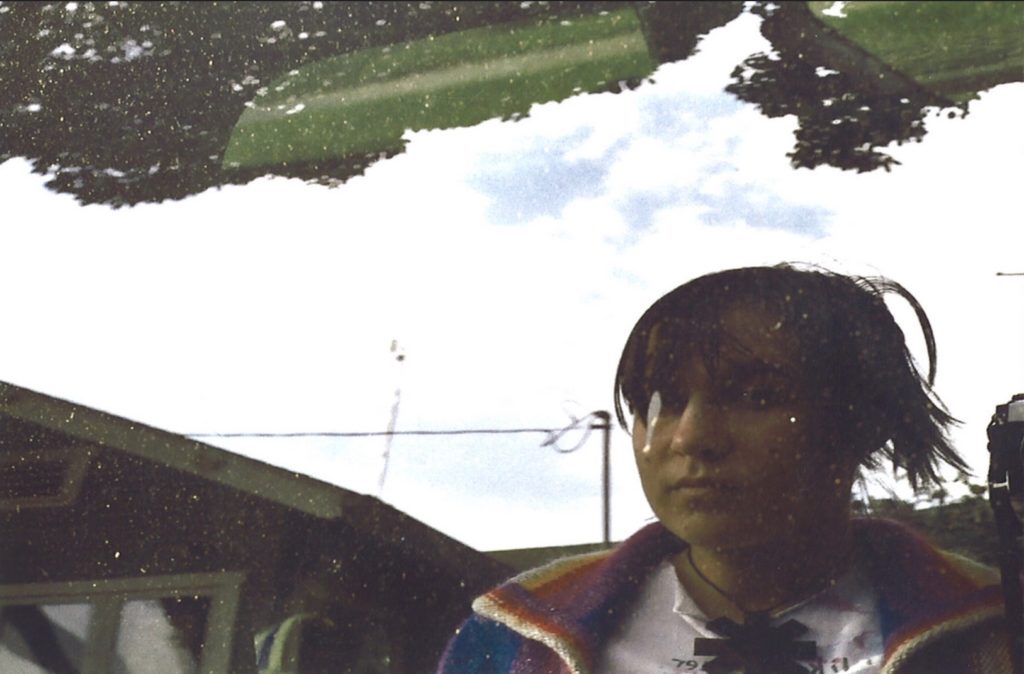 I’ll say to you that of the cities I’ve lived in— major cities— I would say that the community here (most of us are makers of some kind: artists, writers, filmmakers), the support, the accountability in this town is really unique, and it’s been that way for a long time. New York is so big that it’s very transient, and you can go in and out of different worlds within the city, and people don’t really know who you are, and you forget who you are, because there is another new thing happening right after you. In this town, when people meet you, even once, they know who you are, and they remember you and make more of [their] relationship with you.

Making things with people in this town is a real, genuine, collaborative experience. I feel deep connections with my friends here, because we have time to hang out with each other and really see each other. I think in the modern world [people are] being really overworked, not having any time, not really seeing people and spending time with people, not taking in the earthly pleasures in life, and not making that a priority.

I think in Santa Fe you can have a very fleshed out art career here, and you can live the good life. You can have a nice meal with your friends, and have time to do that, and also have time to shoot a film. In most cities you can’t do that, It’s one or the other. I think that’s super special, and the landscape of Santa Fe is so conducive to that. I think a lot of people will agree that it’s such a special place for that reason. 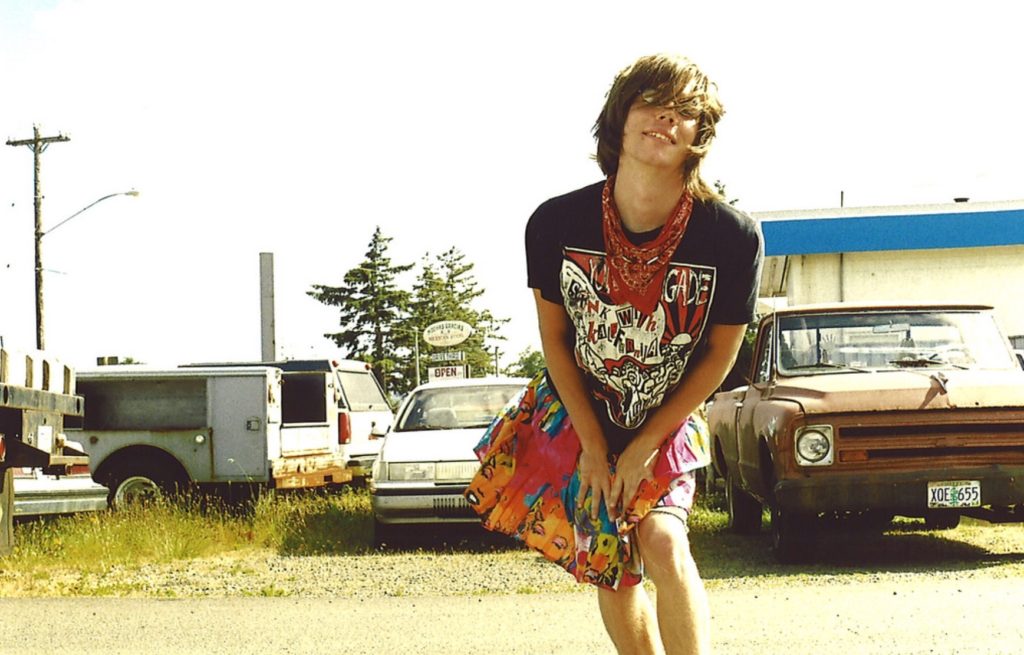 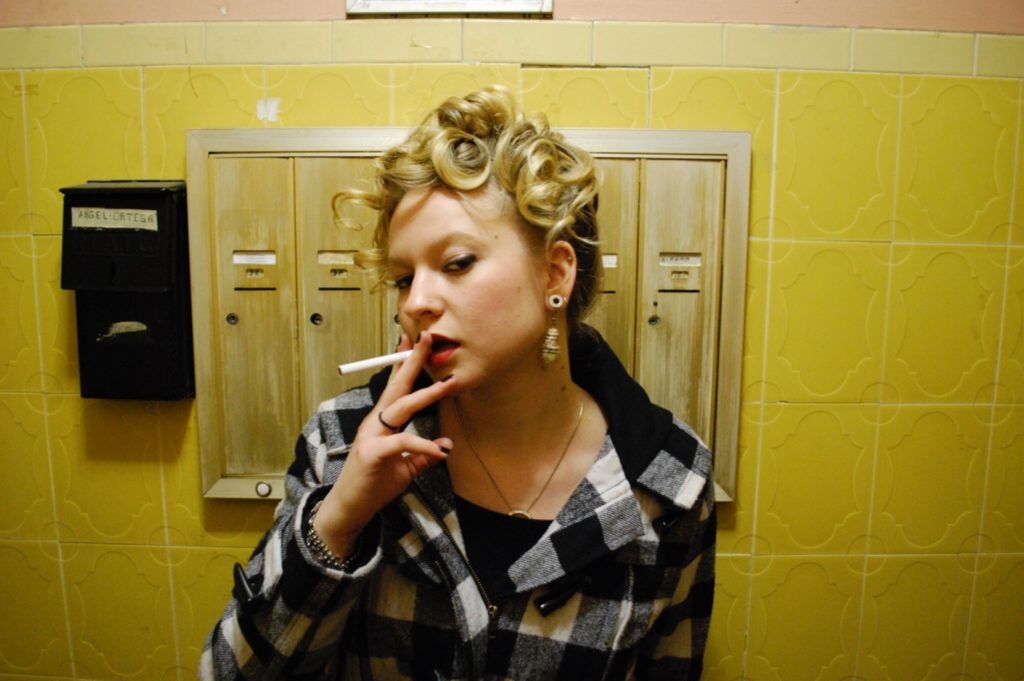