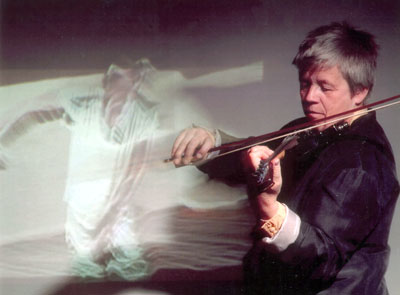 Steina is a legendary pioneer of video and electronic art. She and her husband, Woody Vasulka, have been producing works since the 1960s. Together they founded The Kitchen, a groundbreaking venue for experimental media art and cross-disciplinary performances in Manhattan. The pair have been honored with many awards, and they have exhibited their work all across the globe.

Steina and Woody have lived in Santa Fe, New Mexico since 1980. Visit their website to learn more about their work. 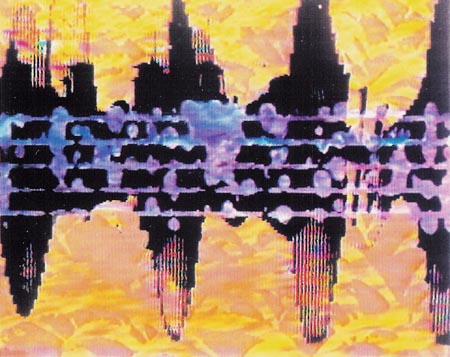 Still image of Vocalizations, a projected video environment by Steina

For people who don’t know your work, can you talk a little about who you are and what you do?

I’m a former musician, a violinist, and it became very dry and boring, so I traded it in for video with Woody. He was a filmmaker, so it was easy to switch over. We took a very technical liking to the craft. It was unbelievable to be able to play back instantly. So we did that successfully enough to make a living or dying out of it.

We were in Buffalo, New York, because New York at that time was by far the most progressive state. Strangely enough, it was because of the Republicans more than the Democrats, like Rockefeller. Their idea was that because their whole state was paying taxes, the whole state had to benefit, so they forced the art scene out of Manhattan. I thought that I had never heard anything so stupid, because Manhattan was a center for the whole world.

But that was very fortunate and worked very well. Media art and emerging art happened to a large degree in New York and the upstate. Bill Viola was in Syracuse. We were in Buffalo. Gary Hill was somewhere floating in the state, and there were many centers and they had broadcasting, which is kind of an untold story. This emphasis on the art and the year-long conferences that just went on endlessly was very beneficial for everybody.

We had the worst snow in Buffalo, so we decided it was time to leave. There isn’t much choice when you have the whole United States to choose from, maybe even the whole world. It becomes very narrow, because you don’t want to move to the Midwest, even beautiful places like Idaho. It was natural that we took to Santa Fe and when we came here to check it out, it was an absolute fit. There was media arts going on and there was music, especially classical music that I was still very attached to. We never looked. Basically we just flew here and said, “this is it,” and moved here. 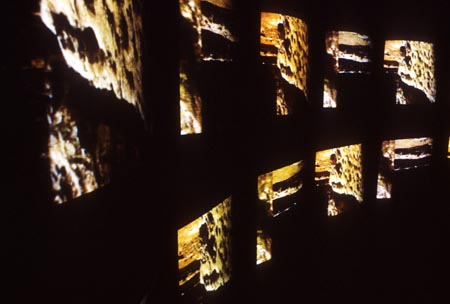 Image from The West, an electro/opto/mechanical environment by Steina, audio by Woody Vasulka

We found Santa Fe in ‘71 when we traveled to the west coast and spent some time here. Then it was a candle in our hearts until we decided in ‘79 to come. So we came here totally in the beginning of 1980. I thought it was kind of significant, 80, and it has proven to be that. So much happened after we were the early arrivals in this media onslaught, people came just one after another. Santa Fe was pretty much a media town, besides the big ones, you know, New York, Chicago, San Francisco. This was it.

We’re talking media, but Santa Fe is culture generally. Culture doesn’t flourish because there’s only one kind of media, and this place has always been full of painters and writers, very creative people and very good audiences. So that’s the Santa Fe story. 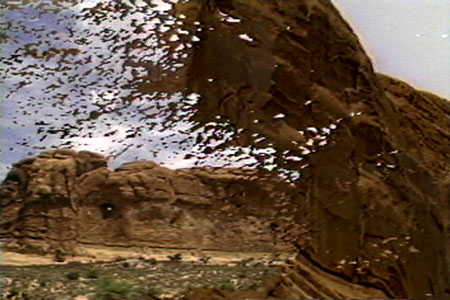 Still image from Geomania, a video matrix by Steina

Why is Santa Fe so special?

To me, one of the biggest victories is that Santa Fe is small and we all basically know each other. Whenever there is an opening or a show, it fills up with local people. All the openings are civilized, and then come the old timers and new timers and everybody who has always met before, and it’s kind of like a conspiracy, and it’s very pleasant. I would say that is a huge asset for the city and the whole state.

The region is also indescribably beautiful. 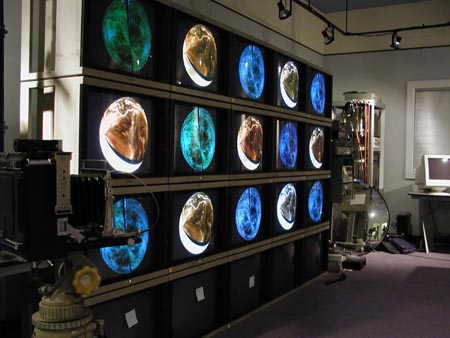 Of the North, a video matrix by Steina

You were a classical musician, and then you fell in love with video art. What was so exciting for you about video?

Everything changed when we got into video, and Woody was there already half a year before me. Our lifestyle changed, and we became English-speaking. We had gotten away with being in New York speaking European languages, and certainly we were Americans. We had to learn the whole vocabulary that goes with media—the horizontal and vertical frequencies, the amplitude, all these technical terms that never occurred to me before. And we changed all our friends. Our old friends were a little disappointed that we had become Americans, but for us, it was very exciting.

We were doing something that was so immersive and so surprising. Lots of people would knock on our door, and say, “my name is so and so, and I do video,” and we would say immediately, “come in and have a glass of wine.” Our home was a media party, and everybody wanted to show their work.

That’s when we decided we would have to open the theater. It was called The Kitchen, because we couldn’t accommodate all these people in our house. This changed everything and it has been our attitude for the rest of our lives: this kind of open, curious feeling of comradery and that you are involved in something that is still today very exciting. 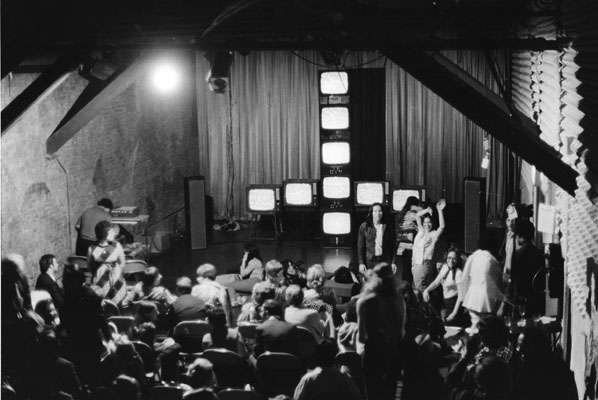 Can you talk more about The Kitchen?

The Kitchen is still open and still doing well. We wanted to define it a little when we opened, so we called it Live Audience Test Laboratory (LATL) so people would understand that they as an audience were being experimented on, and you tested them. We were all totally fearless, because we didn’t know the audience.

Once, the whole audience walked out, I mean one-by-one, people couldn’t take it anymore. The performer repeated one sentence for at least an hour, probably even two.

At one point I also gave up and walked out. There was a whole audience outside. There was a bar just outside The Kitchen, and they were all sitting at that bar. So when this hapless performer came out, he was treated with applause and screams, and he was a hero. So that is what I mean— there was a Live Audience Test Laboratory. 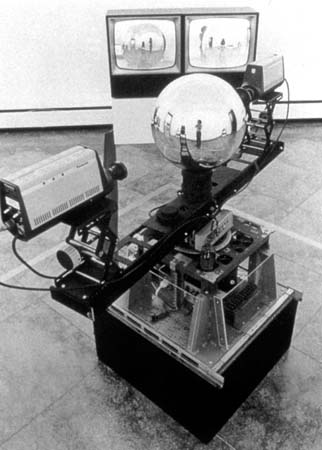 The interesting thing about emerging media is that it’s so tied to evolving technology, and the artists who are working in this way are charting new territory as they go. What is that like?

We instantly started to find people who could make tools and who could make visual tools that would not follow the tradition, not be like network TV. They were our comrades and friends. The buzzword was “modification.” We always had to modify. We had to break the rules. And it’s a common effort.

We felt maybe sometimes we should leave emerging media alone, because people are more interested in other kinds of video, but we were never alone. We assumed we didn’t have an audience, but we always had an audience. In The Kitchen it was so obvious that there was an audience, and it’s not the audience that comes to be entertained, or to walk out of there and say, “aha!” Emerging media has an audience that is as intensely involved as you are. So you’ll fill the room up with people who are all in the same state of excitement. 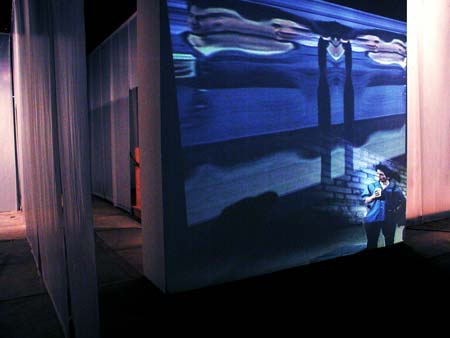 Are there any new technologies that you’re particularly excited about that people are using to make art?

This whole immersive thing in 3D, what the iPhone doing— it’s so amazing. It’s just beyond belief, but I am stuck with my time and my place.

I’m very happy with digital. I mean we lost certain functions. There was something about analog video that was incredibly magical.

The amount of control in digital media is astounding. In analog, we always had the problem that we will have a setup, and then we will turn it on, and it would look totally different from the setup that we had left the night before. There was a non-predictability and a higher rate of failure, because you just had to stand out there naked, and see if it will work. That suited me very much. 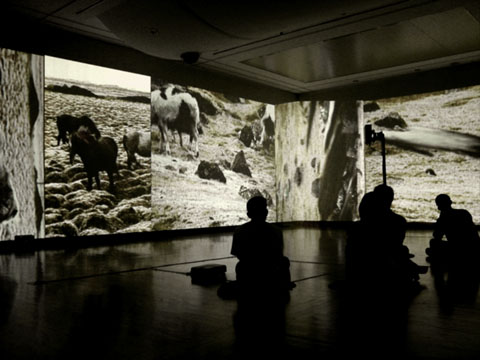 What would you say to someone who is attending Emerging Media Month events in Santa Fe like CURRENTS for the first time? What might they experience?

They’ll see something quite unique. This is a place where you can get an overview—that includes successful works, perhaps some unsuccessful works, and everything in between. CURRENTS is a pinnacle.