Caitlin McShea is the Miller Omega Programs Manager at the Santa Fe Institute (SFI), and director of the InterPlanetary Festival, a new annual community event hosted by SFI, as part of the larger InterPlanetary Project. The festival presents complexity science in an interactive and participatory way, by exploring intersections of science with the visual arts, music, film, technology and gaming. 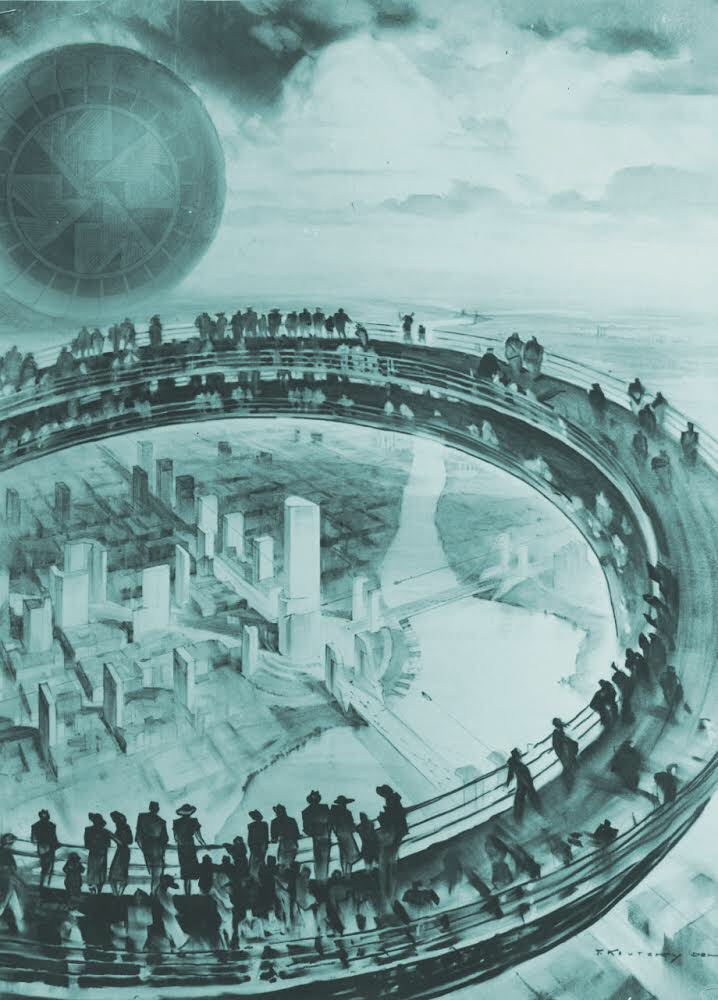 Tell us about the Santa Fe Institute and the InterPlanetary Festival.

The Santa Fe Institute is a complexity science research facility. It seems like it’s up on a mountain, but it’s close to the center of town. SFI was founded about 34 years ago by some renegade Los Alamos National Lab physicists and mathematicians who were hoping to find a way to practice their sciences in a much less disciplinarily-siloed way, so the mathematicians and biologists and chemists and authors and artists could all converse about certain patterns that they continue to see throughout what they’re studying.

So the mission of the Santa Fe Institute is to find order in the chaos of the evolving world. Unlike science facilities where you’re very strictly focused on a certain aspect of your research and you go deep, deep, deep, deep, deep down that rabbit hole, SFI is looking for these general patterns that govern systems at every level—microscopic all the way to the macroscopic. That’s SFI in a nutshell.

The InterPlanetary Project is a new initiative that our most recently inaugurated president, David Krakauer, put together with the guidance of one of our benefactors, Bill Miller, under the Miller Omega program. The idea is essentially to take up this unique moment in human history. Within our lifetime, civilization is going to be split between planets, which is crazy. As far as we know, we’re the first species to do that.

In order to do that, there are all of these challenges that we’re going to find ourselves confronting. If we’re able to terraform Mars to grow and prosper there or travel quickly to another planet without losing years of our life, theoretically those solutions could apply and map onto the problems that we have back here on earth so we can economize, travel more efficiently, reduce disease, and figure out how to better use lands that don’t have a lot of utility, like Antarctica.

The idea is to take the opportunity of going out to other planets to solve these problems that we haven’t yet been able to solve for ourselves. So that’s the project mission, which is, modestly, to change the world one planet at a time. We start with earth. We’ll get to the moon. We’ll take what we learned from that, reflect back, and then we’ll go to Mars and on and on.

That’s the project, and it is multifold. It’s the actual complexity research that SFI is doing at various levels of system study: astrobiologically or on the system scale of cities and economies, or all the way down to microbiology, and economies, and social systems, and everything in between. That’s the main aspect of it.

There’s a secondary aspect, which is a little farther out, and a real challenge and exciting possibility. We hope to develop a platform that would allow researchers to collaborate easily. This would also give the non-initiated layperson an opportunity to engage with the science too. The way that we think that it will be most successful is if it’s social and gamified and a bit like a simulation and open source too. So it takes some of the open source movement and creates a citizen science hub of activity. It’s very rigorous, like a Wiki, but it’s also fun like a reddit as a social media opportunity.

This would be unprecedented. There’s not anything like that to succeed in getting the science out in the world. We need it to be like the best of all websites we’ve ever encountered. A big portion of this upcoming InterPlanetary Festival is to bring in movers and shakers in web development and game development to think through the planning of this platform.

Tell us more about the InterPlanetary Festival.

This is our first annual InterPlanetary Festival. The idea is to take all of the thought-provoking aspects of a science conference, but to make those aspects available in a fun and experiential way. Instead of having a conference room in a hotel or only very special scientists allowed to engage in these conversations, we’ll have a huge stage in the middle of the Railyard.

We’ll have several panel discussions that are punctuated by live concerts and Sci Fi film screenings, surrounded by pop-up art installations and an interactive technology expo, and food, beer and coffee— everything you need to have a good time and to remain stimulated in a memorable and unusual way. That’s how the evolution of the Festival came to be in thinking of all of the ways in which we can make InterPlanetary thought sexy, how we can answer these hard questions in a way that’s totally accessible to any variety of people.

We started working with filmmakers and a video game developer and Sci Fi authors as well as scientists. In that way we have a broad cross section of those who are represented on the panel. We’re not only talking to astrophysicists or scientists who worked endlessly on fission or something like that. We’re talking to the people who have imagined it, felt it through special effects, or the authors who wrote about it. That way it becomes a little more immediate, because we’ve all encountered these things and art prior.

When we started thinking about that, it occurred to us that we needed to reach out to CURRENTS because it’s a fantastic event that combines art, science and technology in a memorable and experiential way. We thought that it was a really good foundation for the kind of thoughtful conversation about aesthetics that we might be able to have at InterPlanetary. So we walked into CURRENTS and presented the idea to see if they were interested in it. That’s the first community partnership that was built, and now we’re watching a lot of these interesting things happening around it, which is fulfilling.

What sorts of interesting things are you finding in your partnership with CURRENTS?

The CURRENTS partnership is super synergistic and natural. We’re building out spaces for certain expo booths which create these big white wall spaces for people to project upon. So there’s that kind of aesthetic play between our events. Our closing night concert is co-presented by Meow Wolf, and that’s Max Cooper who’s a DJ,VJ, and also a computational biologist.

So, there’s this really delicious musical and visual presentation that acts as the close to InterPlanetary and also as this grand opening for CURRENTS. That’s been really fun. One of their artists, David Stout, is actually speaking on one of our panels, so you have the aesthetic creation that he’s working on and how that motivates his understanding of ecosystems. That’s been really cool.

Some of the galleries throughout the Railyard are taking on the InterPlanetary theme and playing with it. So there are a couple of these pop-up fringe events. For instance Photo Eye Gallery is going to have an astronomical photography show the same weekend of InterPlanetary. And those images look astounding. And form & concept has their Inner Orbit exhibition and talk during InterPlanetary and during CURRENTS. Seeing these partnerships build about this cross between art and science has been really cool and so natural. 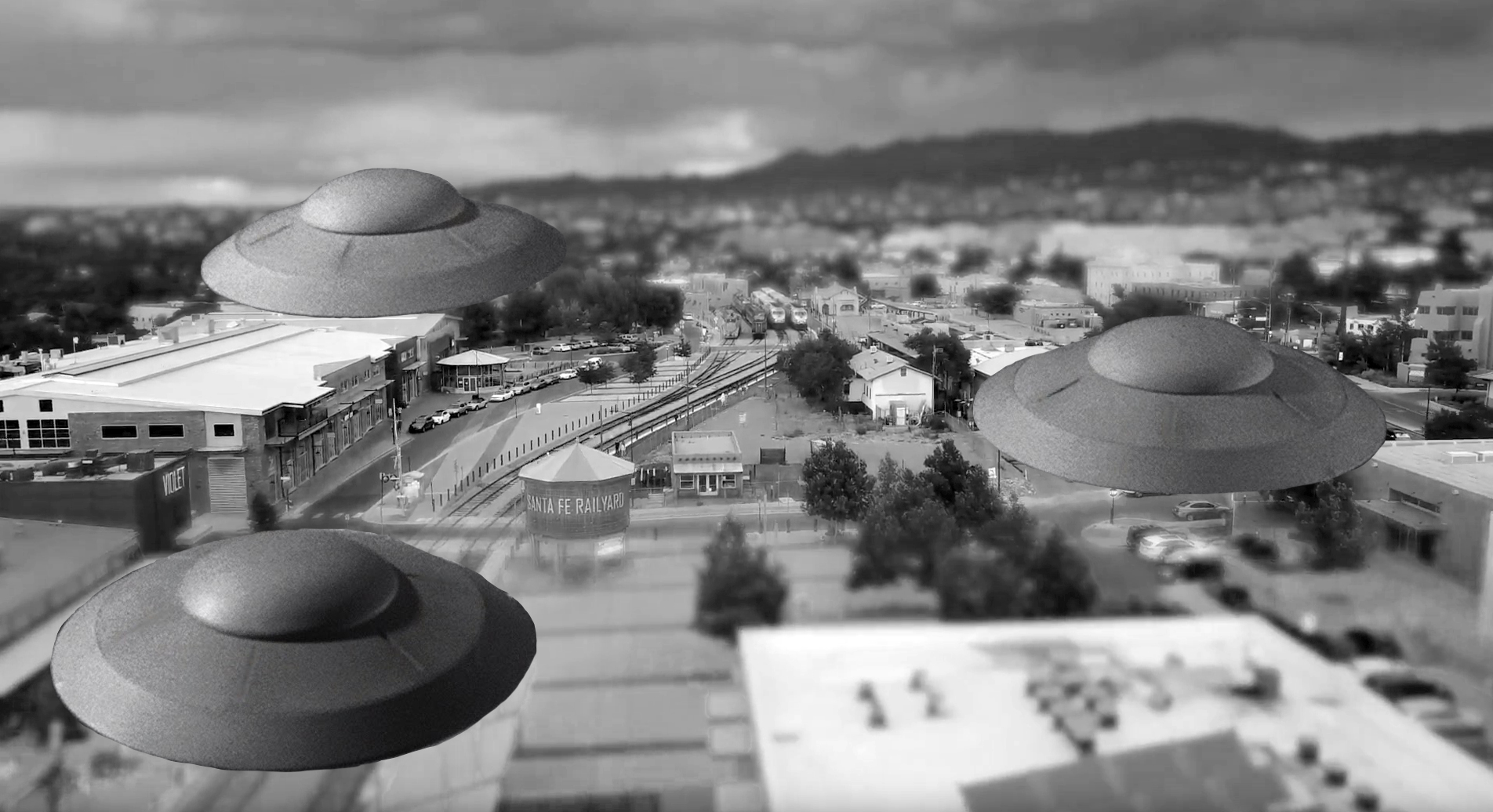 What are you seeing happening in Santa Fe that’s exciting around this intersection of art, science and technology generally?

I’m seeing this possibility for Santa Fe to jump a little beyond its heritage. I think that heritage is important, and obviously Santa Fe has a beautiful history. But there’s this complacency that comes with heritage that makes it so that people outside of the city don’t quite understand everything that’s going on within the confines of the city and the creative people within it. CURRENTS has been happening. Look at all that Meow Wolf has accomplished in recent years, and what we’re hoping to contribute ourselves with SFI.

I’m seeing emerging media as this opportunity for Santa Fe to redefine itself over and against the kind of a traditional presentation with which we are so used to being seen. As a result I think in a couple of years, if not already—I’m actually seeing a lot of movement towards here, especially with the film break, then with Meow Wolf—I expect that Santa Fe can be one of these new hubs of creation, specifically in digital technology, art and visualization.

With Descartes coming here, there’s a lot of industry building around that too. It’s exciting to see. Having lived here for nine years, I’ve never really felt as galvanized about the future of Santa Fe as I have in the last few months. It’s confluence: creative people doing challenging and important things.

What’s exciting to you about emerging media?

I think emerging media is awesome because of its dynamism. I actually think about this quite often. I have all of this information that I’m distributing for InterPlanetary, but it’s not interactive in any way. You can’t see changes happening, and it’s stale as soon as it’s printed, right? Paper is not new media. But the play with which we have in developing the website, or the play with which certain artists have in creating immersive experiences around this theme—just the fact that emerging media is a little more capable of communicating certain messages by virtue of the fact that it’s not stagnant and stale is really exciting.

So much of what can be expressed through science or literature or in art is limited by its inability to adapt or evolve. The kind of evolution that’s possible in emerging media, which is evolving in and of itself, is exciting because there’s no limitation anymore.

Santa Fe is so much more than the small, charming pueblo that it’s portrayed to be in certain elements. I think you have to be here to see that. If you only come to Santa Fe to see Canyon Road, you have no idea what magnificent people are doing in the city outside of the Plaza. Santa Fe is so much more than it appears to be, at least for the moment. I hope that after June that’s different.